Slacklining is a sport and art that can be a balance training, recreation, and a moving meditation. It is similar, at first glance to tightrope walking, and is accomplished by stretching and tensioning a 1”– 2” wide length of nylon/polyester webbing between two anchor points, most often trees. Its origin has most commonly been attributed to the rock climbing community in Yosemite National Park as a way of passing time while maintaining concentration, fitness, core strength and balance skills.

Although the sport originated over 40 years ago, the last 10 years has seen a great leap in newcomers, slacklining groups, advancements in technologies, rigging methods and exposure for the sport through mass and social media outlets. World-wide interest in slacklining has been steadily increasing, and organizations like Slackline U.S. and the International Slackline Association have been founded to help the community self-regulate, to provide assistance for access issues, to share safe rigging practices, and to promote Leave No Trace ethics.

Meanwhile, the sport has transformed from traditional “primitive” slacklines into a growing collection of variations.

Any slackline rigged over water is described as a waterline. Walking over water tends to be unexpectedly difficult, as the movement of the water influences the ability to control balance since our visual sense of level ground is distorted. Waterlines tend to be one of the safest forms of slacklining, as there is a low injury potential for landing in water (~4% of injuries reported in the ISA – Slackline Accident and Incident Report Analysis 2015 occurred during waterlining). However, some slackliners have reported inner ear injuries from water impact.

Despite the extreme appearance, highlining has a strong safety record and the community does a great job of self regulating in terms of safety and promoting Leave No Trace ethics. While the media sometimes describes highliners as thrill seekers, it is actually quite the opposite. Highlining requires a very calm approach and a focus on self control. Additionally, highlines are always rigged with redundancy, meaning that every component in the system is backed up, often with multiple backups so that no single point failure can cause the line to fail. Most highliners avoid walking near the ends of the line where a fall might cause them to be injured by a fall near the cliff wall, choosing instead to scoot out a safe distance from the wall and start from a sitting position, further minimizing risk.

We actively gather reports in the same way as the American Alpine Club does for their Accidents in North American Mountaineering publication. This first publication takes into account all known significant incidents since the beginning of slacklining in the 1970s and amounts to approximately 200 incidents over that 40 year span, most of which resulted in only minor injuries. Only 4.7% of injuries reported in the ISA – Slackline Accident and Incident Report Analysis 2015 occurred during highlining and only one fatality has been recorded in the sports 30+ year history. Our current estimates suggest there are at least 30,000 active slackliners worldwide, with approximately 5,000 practicing highlining. Given these numbers, highlining represents a low risk of serious injury or death, especially compared with other outdoor sports (mountain biking, for example).

Highliners almost always wear a harness and leash so that a fall involves only a small swing in open air with. Only a small number of highliners forego the leash (free solo) and only occasionally, comparable with the practice in climbing.  Even in the case of a highliner soloing, the risk is lower than that of solo climbing as a the soloist can catch the webbing on a fall, a basic highlining skill that becomes reflexive.

Tricklining is a combination of gymnastics, acrobatics, and slacklining in which the slackline is rigged with a stretchy webbing under higher tensions, allowing for a trampoline effect. Trickliners bounce, jump, flip, and spin with a rapidly growing collection of tricks being developed.

Many slackliners practice some form of yoga slacklining or yogalining, in which common yoga poses are adopted on a slackline. The movement of the slackline increases the difficulty of otherwise simple yoga poses.

In recent years, rodeolining has become increasingly popular both as a training method for highlining and in its own right. Rodeolines are especially loose, often rigged by simply anchoring each end of the webbing without any tension, forming more of a U-shape than a line. Slackliners may intentionally cause the line to swing from side to side, a practice called surfing. The loose tension provides a different sort of challenge from tensioned slacklines, and is great training for longer and looser highlines. 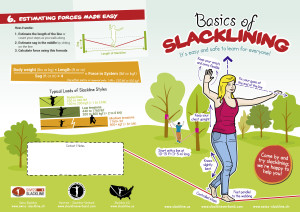 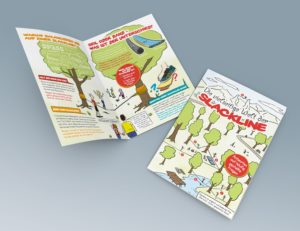