The Cosumnes River Gorge Highline Gathering, as it’s advertised on Facebook, was my first time on a highline. And wow, did it not go well. But that didn’t take away from the gathering as a whole being a blast. We got in from Portland, OR at around 10:30 PM after having driven around 10 hours to Placerville, CA. On the way, we picked up an Argentinian highliner named Alejandro, who was looking for a ride from Ashland.

It wasn’t actually hard to find CRG, even though we had no wifi and weren’t sure exactly where to pull over — you could pick it out by the forty or so cars parked on the side of a middle-of-nowhere highway. We picked a random trail and, lucky us, found some highliners engaged in late-night revels, singing and playing guitar around a tent. They were very grateful that we had portable speakers, which we handed over before going to bed.

The next morning I got up early, unable to sleep well and thinking I should use what energy I had to make a good first attempt. I chatted with some others who were awake too, and then made my way over, with a small group, to the smallest highline at CRG — the 70’. On the way, however, I got a look at the big ones, and wow. I’ve walked longlines of nearly 200’, but these highlines ranged up to 370’. Word was that Jerry Miszewski had arrived from the east coast with gear to rig the 450’.

Speaking of Jerry, it’s worth touching on his importance in the history of CRG. As far as I know, he established the area as a highlining destination, and has set two former world records there, walking a 700’ and then 1,000’ highline. Miszewski also, apparently, organized a slacklining festival yearly in Sacramento while he still lived in California, and as part of that festival organized a day trip to CRG for highlining. It was this day trip that gave CA-based slacker Justin Smestad the inspiration to organize the first “highline gathering” at CRG.

But back to the highline. Even though this one was only 70’, it was incredibly intimidating to tie in and slide out past the third piece of tape on it, so that I could chongo. I was sort of amazed that I hadn’t fallen just in the sliding process, even though I’m pretty comfy on longlines of twice 70’. The vertigo was nearly causing me to shake. Somehow I got a foot up into chongo position without falling, and made myself try to chongo. I remembered what Alejandro, who said he had established half the highlines in Argentina, said about needing to go through the motions without thinking. I brought my foot up — and boom. Whipped.

And I couldn’t even get back up! Climbing the rope was the most challenging thing I tried all day. Damn, I should have practiced it more on the ground. Finally, a friend threw me a rope and hauled me in, much to my dismay.

Chastened, I ate some food and decided to do some waterlining until I could try the line again later in the day. But it was not to be — my friend, who doesn’t slackline, needed to be back in Berkeley for her dad’s birthday. So we were off come sundown. Besides, I felt like I really wanted to practice rope-climbing and mantle mounting on the ground before I made another serious attempt, so that I’d not waste everyone’s time struggling back up.

Alejandro said that the highline mojo had psyched me out, made me make excuses. He might be right. But I’m trying again tomorrow.

A huge shoutout to Justin Smestad for organizing the first, hopefully-annual Cosumnes River Gorge Highline Gathering. He and several others, including Miszewski, rigged lines ranging from 70’ – 450’ in feet. Here is a brief rundown of those lines: 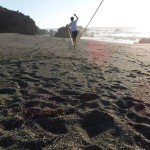 Ian is a recent college grad trying to figure out what to do with his life. Hopefully it involves both writing and highlining.